Olo potatoes. Well it's been a long time. Okay not really but humour me. 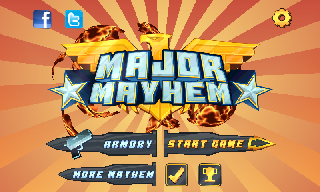 Today I'm doing a review on a game that i decided to download yesterday from the guys at [adult swim]. I actually planned to do a review on the [adult swim] app but then it really wasn't interesting enough, well at least not to me (if you truly are interested to see that review let me know). The game is of course as per the title Major Mayhem.

The title really says it all. This is a game about a badass doing highly badass things. Basically the story is that you are this army soldier who gets orders direct from the president. You come highly recommended for your skills in combat and also for the love you obviously hold for your girlfriend since she is kidnapped in most of the missions. Your mission is to go into various locations and cause chaos and destruction to the enemy forces. On some levels you are also required to rescue some prisoners of war before flying off to your next location whilst hanging off a helicopter in a badass way. 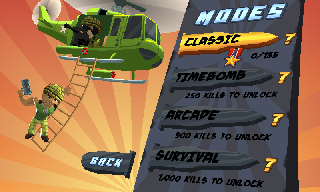 Controls are great in this game. Since there is no need to control the running you are mostly left free to fill the enemy with holes. The best part about that is that even the controls to do that are simple. You just tap on an enemy to make your shot. It starts getting tricky when you have to run and shoot at the same time but selecting different guns makes this easier. 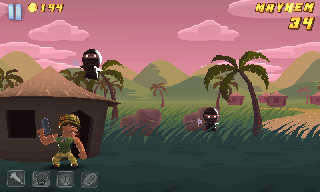 And if you are now wondering, after my last statement, about how to get the guns. Well there is an in game coin system that goes on. With each mission and each kill there is a certain number of coins that you earn. You then use these coins to get better weapons, armour and supplies. As usual with games like this, you are given the option to use your real money to buy fake money that you will only use a few times. Seems legit.
The graphics are great. They're cute and badass all at the same time. It is nice to see that the developers went for a more cartoon 3d effect rather than a resource intensive life like approach. This makes the game a dream to download because it is only around 25meg to download.

My over all opinion is that it is a great time cruncher, rather addictive for its simplicity, and the scripting adds a few laughs. Of course the best part is that it is free.
TouchToTouch.end

Thank you for your input